Enter your City name or Pincode

Kannur otherwise called as Cannanore is a municipal corporation as well as city in the Kannur district of Kerala. The city is also the headquarters of Kannur district and is situated 518 Km to the north of Thiruvananthapuram. During the British reign, the city was known as Cannanore and today only in the Indian Railways, it is called as Cannanore. Kannur is also called as "land of looms and lore" due to the flourishing loom industries as well as for organising ritualistic folk arts at the various temples. Apart from the loom industries and folk arts, the city is also well known for its unspoiled beaches. The city is also of military importance as it constitutes one of the 62 cantonments in the country. The headquarters of Defence Security Corps and Territorial Army’s 122 Infantry Battalion and the Ezhimala Naval Academy is situated 35 Km to the north of Kannur city. This Naval Academy is the largest in Asia and the third largest in the world. An Indian Coast Guard Academy will also be built on the riverbanks of Valapattanam River. Thus, Kannur Cantonment is also one of the important cantonments of the country. 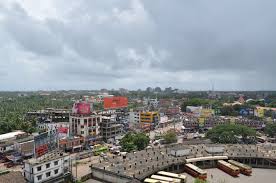 Kannur or Cannanore is the name that is derived from an ancient village known as Kanathur. According to the local legend, the Kannur is the combination of two words in Malayalam i.e. Kannan (Lord Shri Krishna) as well as Ur (which means place) thus it is known as “the place of Lord Shri Krishna”. Kannur is the ancient coastal city of Kerala. It is also the 6th largest city in Kerala and the largest in the North Malabar Region.

The mountainous region of the area is full of rainforests, plantations of coffee, tea, timber plantation and different kinds of spices. The main occupations of the residents of Kannur are Agriculture and Fishery and 13% of the Kannur population is employed overseas.

Kannur is also quite popular for Ayurvedic treatment centres and attracts tourists from all over the world to this city. The therapies given are not only rejuvenating but also cure ailments. The tourists can book in advance so that they can get the accommodation along with treatment.

Kannur district lies between the latitude of 11o 40’ to 12 o 48’ to the north and a longitude of 74o 52’ to 76o 07’ in the east and comes with a total area of 2,996 km2. Kannur could be divided into three regions namely highland, midland and low land. The mountainous region that forms part of Western Ghats are the highlands and it is covered by coffee and tea plantation, rainforests, spices like cardamom and timber plantations. The midland region consists of undulating valleys as well as hills and lies between highlands and lowlands. The lowland is a narrow stretch that consists of coastal region, rivers and deltas. Six rivers flow through Kannur with the longest being the Valapattanam, its length being 110 Km. Elapeedika is the highest place with 2,500 to 3,200 feet near Peravoor.

The district comes with a humid climate from March to end of May being the summer season. This is followed by South West monsoon till the end of September. October and November are the north east monsoon or the retreating monsoon season. The maximum temperature during April and May would be 35o C. During December and January minimum temperature is 20o C. The night temperature might go down to 16o C though it is quite rare. The average annual rainfall of the district is 3438 mm and 80% of it is achieved during the south west monsoon. However, the rainfall in July is quite heavy and 68% of the annual rainfall is achieved during July.

As per 2011 census, Kannur district comes with a population of 2,525,637 which equals the population of Kuwait or the Nevada state of USA. It gives a ranking of 170th population state in India out of total 640. The district comes with a population density of 852 inhabitants per square kilometer and the population has grown at a rate of 4.84%. The district has a sex ratio of 1133 females for every 1000 males which is the highest in India and has a literacy rate of 95.41%. It is also to be noted that Kannur is the most urbanized district in Kerala and is in 4th position after Ernakulam, Thrissur and Kozhikode. Around 50.35% of population live in the urban agglomerations of Kannur which comes to 1,212,898. It ranks second in the urban population next only to Ernakulam. According to 2001 census, Hindus form a majority of the population with 61.47%, Christians constitute 10.84% and Muslims constitute 27.63%. Apart from Malayalam, people also speak languages like Kannada, Tamil and Tulu. English is spoken by the Anglo-Indian community.

There are six rivers that flows through the district of Kannur with the longest one being Valapattanam which comes with a length of 110 Km. Other than Valapattanam river, the rivers such as Mahe River, Kuppam, Anjarakandi, Ramapuram, Perumba and Thalassery also flow through this district.

Economy and Business of Kannur

Predominant occupation of the people of Kannur is agriculture. Most of the people directly or indirectly depend on agriculture for their livelihood. Some of the crops grown in the district are coconut, paddy, pepper, tapioca, arecanut, cashew as well as the plantation crops such as rubber. Asia’s largest cinnamon estate which produces cinnamon spice established by Lord Brown in 1767 is located at Anjarakandy in the district of Kannur. In most of the agricultural land paddy is produced at large. Since the introduction of high yielding variety programme they were also able to achieve remarkable increase in paddy production. Though most of the paddy growing lands are converted into other purposes, yet they are able to achieve 2146 Kg per hectare.
Coconut is the second most important crop grown in Kannur and the important cash crops grown in the district is the cashewnut. It is to be noted that cashewnuts are cultivated and produced in a unique manner. The vast wastelands that are available with low fertility are considered ideal for the growth of cultivation of cashew and for the allied industries. Pepper cultivation occupies important place in the cultivation of spices in the district. Normally, pepper is cultivated as inter-crop with fruit trees, arecanuts and coconuts. On the hilly parts of the district rubber and cashew are grown as inter-crop and also quite important among the plantation crops. Iritty taluk produces 55% of the total rubber cultivation of the district. It is followed by Thaliparamba, Kannur and Thalassery taluks. The rubber is produced from 2000 Kg to 4000 Kg per hectare.
Kannur is also an important district from the industrialization point of view. The district has many advantages. Some of them are good soil, rich forests, salubrious climate, enormous fishing potentials, etc. The district also has good infrastructural potential such as rail, road, inland water, etc. It also has vast potential for the development of industries. However, it is to be noted that Kannur is industrially backward district. The district has a major industry and five mini-industrial estates. The district also has twelve medium-scale industries and most of them produce cotton textile or plywood manufacturing industries.
Some of the traditional industries found in the district are handloom textiles, beedi and coir, and for nearly one lakh people textile industry is their livelihood. Since the beginning of 19th century, textile has been constituting 40% of the small-scale industrial units in the district. It is to be noted that the first ready-made garment unit of Kannur and hosiery unit of Kuthuparamba was started towards the end of the 19th century. Next to textile, the beedi industries provide employment to 50000 people and some of the famous beedi companies are found in Kannur district. The third major industry is the coir industry which uses traditional technology and provides employment to 11000 people of the district. The district has 6934 small scale industries and out of that 202 are sick units and constitute 9.3% of the total sick units found in the state. Some of the cities that have been identified for growth of industrial developments are Kannur, Payyannur, Edakkad, Thalassery and Taliparamba.

Kannur district is one of the northernmost districts in the south western state of Kerala. The district is surrounded by Western Ghats in the east and Lakshadweep Sea on the west and has a wealth of natural beauty such as unspoiled beaches, hill stations, rivers, historical monuments and religious centres. It also carries history over its head and is the cradle to many picturesque folk art and folk music of Kerala. Some of the major tourist attractions in Kannur are:

Tourist Attractions in and near Kannur

No travel is complete without shopping something. For the shopping lover in you, Kannur market area is worth exploring. The ideal thing to be bought is the handicrafts and small knick-knacks which could be preserved as a memorabilia to this city. The busiest shopping centre of the city is the Fort Road. Other than that, the tourists can shop from biggest shopping malls of the city such as Super Bazaar, Kannur City Centre and Fortlight complex.

Religious Places and Festivals in Kannur

All the traditional Hindu festivals are celebrated in Kannur according to the Malayalam calendar. Some of the festivals celebrated are Vinayaka Chathurthi, navarathri, ashtami rohini, Mahashivarathri, Onam, Vishu and pooram.

Kannur popularly called as the Land of Looms and Lores is a major center of Theyyam which is a ceremonial promenade pattern of North Kerala. There are lots of little temples called Kavu in Kannur region. There are numerous pilgrim hubs in Kannur for Hindus, Christians and Muslims.

The major temples in this region are Raja Rajeshwara Temple, Parassinikadavu Sri Muthappan Temple, Kottiyoor Mahadeva Temple, Katalayi Sreekrishna Temple and Peralassery Sri Subramanya Temple. There are many other temples also and these are visited by thousands of pilgrims.

Some of the significant churches in Kannur are St Theresa’s church, Holy Trinity Cathedral, St John’s Anglican church and Thavam church. There are a large number of Muslims in Kannur region and so there are a many mosques can be found in this region. Some of them include Madayi Palli, Oliyankara Juma Masjid, Odathil Palli and Stadium Juma Masjid.

For the people of Kerala, the rice and sea food including fish becomes an important cuisine. Like any other city of Kerala, food and spices play an important role too in Kannur. The Malabar cuisine stands out among the various regional cuisines as the city had been invaded by many traders right from the ancient age. The raw mango-prawn chutney as well as the raw mango-lemon chutney is the favourite of many traders. It is to be noted that the cuisine of Kannur has been influenced by history, culture and geographic location of the land and food like Dosa, Appam, Puttu, idly and seafoods, etc. are liked by the people here.

How to Reach Kannur

Kannur is well connected by road with all major cities of India and also connected to other important cities of Kerala state. Kannur also has a railway junction and all major trains stop here. Calicut International Airport which is situated 98 Km from the town is the closest airport.

Utilities and Services in Kannur

Kannur is a city as well as municipality and also the capital of Kannur district. As it is called as city of looms and lores, there are many important industries which include agriculture as well as other industries. All the utility services and infrastructure needed for the growth of business and comfortable life of people is available in the city. Some of the public utility services available are as follows:

Are you a Business Owner?

Add the products or services you offer